Price per person for double housing. Individual supplement of €175.00

We offer you a tour of the southernmost territory of both Spain and Europe, picking a seven-day itinerant route that goes through both coast and mountains. Campo de Gibraltar is a region located southeast of the province of Cadiz acting as a border between Europe and Africa, as well as the Gateway between the Atlantic Ocean and the Mediterranean Sea. That and the colony of Gibraltar makes it one of the top strategic locations in Europe.

We’ll enjoy two natural parks, Los Alcornocales Natural Park, which houses the biggest, most continuous and best cared of mass of cork oaks. Its botanical and mycological richness justly earns Los Alcornocales its fame as the last European forest. The second Natural Park will be the strait of Gibraltar, where hundreds of millions of birds cross the strait every year in their migratory voyage between Europe and Africa, making it not only one of the most prominent destinations for bird watching, but one of the most ecologically diverse places in Europe too. 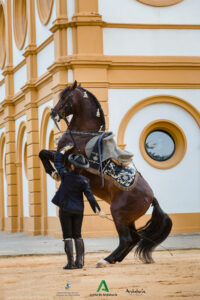 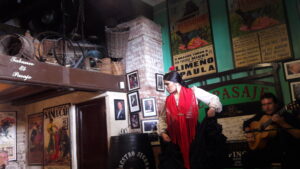 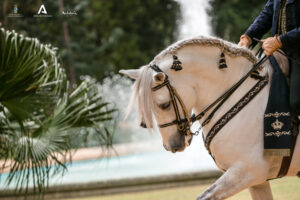 Visit to the Royal Andalusian School of Equestrian Art.

The Royal Andalusian School of Equestrian Art Foundation, based in Jerez de la Frontera, is worldwide famous for their “How Andalusian Horses Dance”, a unique show that both exhibits and summarizes in a seemingly natural way all the work that the institution has done since its foundation.

Lunch with Flamenco Performance in a typical tablao flamenco.

We will ride through los “Alcornocales natural park”

We will go through the roads that were made by the Republican prisoners between 1931 and 1942, before World War II started.

The route offers a splendid view over the Valley of Ojén, where you’ll be able to witness the great contrast between the areas of pastures of cattle and the leafy cork trees forests, as well as the bushy masses of gall in the wettest lands. You’ll also enjoy the particularly striking view off all kind of birds resting on these valleys.

Approximate duration: 5 hours on horseback (three in the morning and two after lunch)

We will cross the mountains where the bandits once lived and assaulted carriages loaded with items coming from the landings in Gibraltar.

Approximate duration: 5 hours on horseback (Half in the morning and another half in the afternoon)

Accommodation and dinner: “Hotel La Peña” in Tarifa o similar. Lunch in either a typical bar or a picnic on the way.

This coastal territory was populated by the Phoenicians, and the Romans took advantage of the settlement to install several factories of sea products, as well as to establish a small colony that slowly grew into a rather important one back in the second century BC.

We’ll ride for Punta Paloma through a pine forest along the Atlantic coast, enjoying splendid vews of the African continent.

The Atlantic coast of Tarifa that we’ll traverse back mostly runs through fine sandy beach trails.

Approximate duration: 5 hours on horseback (three in the morning and two after lunch)

Dinner and accommodation: “Hotel La Peña” o similar in Tarifa. Lunch in either a typical restaurant  o picnic on the way

Visit to the Royal Andalusian School of Equestrian Art.

The Royal Andalusian School of Equestrian Art Foundation, based in Jerez de la Frontera, is worldwide famous for their “How Andalusian Horses Dance”, a unique show that both exhibits and summarizes in a seemingly natural way all the work that the institution has done since its foundation.

Lunch with Flamenco Performance in a typical tablao flamenco.

This could be considered the southernmost route of the Iberian Peninsula.

It runs parallel to the coast through an old livestock route.

The whole route constitutes a splendid natural viewpoint to the Strait, Morocco, and the colony of Gibraltar, with the other pillar of Hercules, the Djebel Musa, forever standing at the other side.

The Djebel Musa was a mythological element in the strait of Gibraltar. It was the boundary of the Greek World until, according to Greek historian Herodotus, Colomo Satos went through back in the 7th century BC.

Approximate duration: 5.5 hours on horseback (three hours in the morning and two after lunch)

Picnic on the way

TRANSFER TO AIRPORT AFTER BREAKFAST

Free transfers included in the price of the program will be made no more
6:00 p.m. the day of arrival and not before 7 h. the day of departure in a single Transfer for the whole group.

Full board accommodation with wáter and a drink per person. Any other drink will be paid for by the clients.

Transfer from Malaga Airport or Jerez extra will have a price €160.00 per people.

Included transfers will be held no later than 18.00h for the day of arrival (Malaga) and not before 7h for the departure day. A single transfer for the entire group.

Every program is guided by a specialized guide.

Every meal, picnics included, is made of typical regional cuisine: paellas, meats, stews, vegetables… in case of needing a special dietary regime you need to ask for it beforehand

It’s advisable to use sunscreen and sun goggles

You need to bring a canteen for water and a bathing suit.

It’s advisable to use a safety helmet.

Transfer from airport, bus or train from Malaga included.

The hotels can be modified under the guias criteria. Possibility of Leisure Program double housing 398.00€ 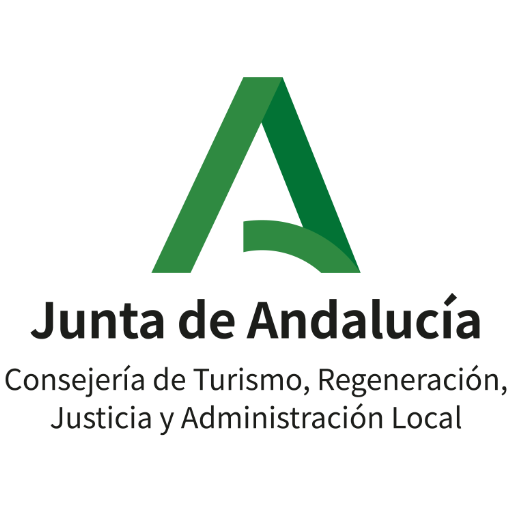